Frozen Planet, the BBC’s polar sequel to Planet Earth, started transmission towards the end of October 2011. There are seven episodes in total.

John filmed shearwaters and humpbacked whales gathering to feed in the Aleutians, gentoo penguins exploding from waves and being hunted by southern sealions in the Falkland Islands, emperor penguins leaping from the Ross sea in super slow motion then struggling back to their colony, young adelie penguins leaving their colonies on the Antarctic peninsula and learning to swim while leopard seals hunted them through the ice floes, fur seals fighting and giving birth in South Georgia where young wandering albatross were also taking their first flights, polar bears eating berries and wrestling on the coast of Hudson Bay as well as searching for nesting eider ducks and Arctic terns in Svalbard where other Arctic birds, including Brunnich’s guillemots, nest on immense seacliffs.

You can see one of the series trailers:

And a slow motion clip of a sealion hunting gentoo penguins from Programme One here. 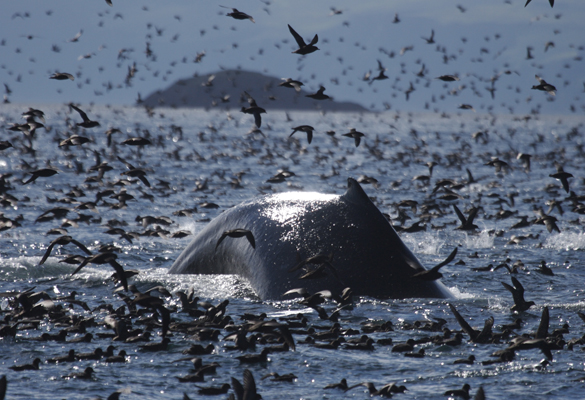 Every summer hundreds of thousands of short tailed shearwaters migrate north from their breeding grounds around Australia and New Zealand to feed on krill in the rich waters of Alaska’s Bering Sea. Humpback whales swim immense distances to be there too. Filming their gathering in sunshine and with no fog was something close to a miracle. In a month of trying everything came together like this on just one afternoon. It’s a vivid illustration of just how productive the polar seas are in summer. 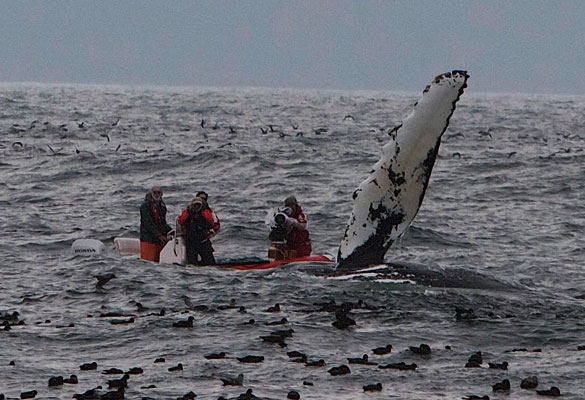 The only way to film the shearwaters from close to their own eye-level was to work from an inflatable boat but when humpback whales, which weigh more than thirty tonnes, came alongside they dwarfed the boat. Photo courtesy Chadden Hunter.

Here is the “making-of” clip about filming the shearwaters and whales for Programme One and this clip is part of the finished sequence. 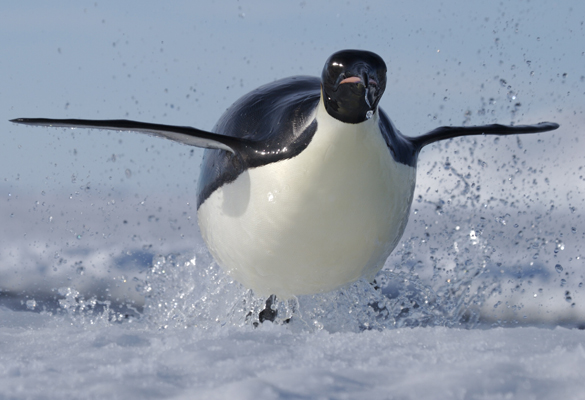 Emperor penguins go to sea for many days to find food for their chicks. This one, returning after a fishing trip, has a very full belly. 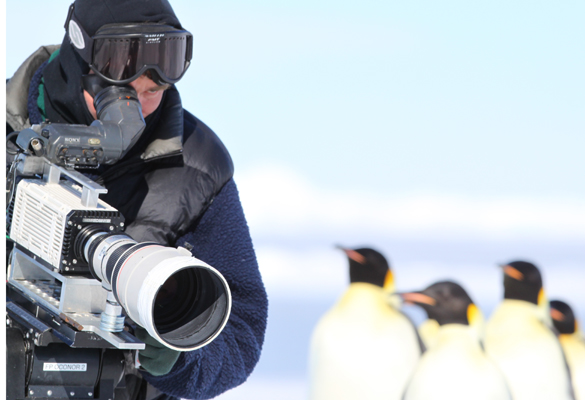 Filming the penguins leaping from the sea through small holes in the ice required camera speeds of up to 750 frames per second, slowing the action down 30 times.
Photo courtesy Dylan Taylor

There is clip here of the flying emperors and another here about filming them in slow motion. 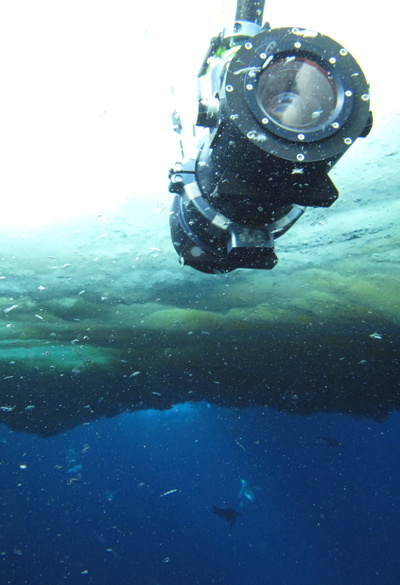 The same camera also worked underwater, on the end of a pole, giving some breathtaking views of the penguins in their element. Photo courtesy Chadden Hunter. 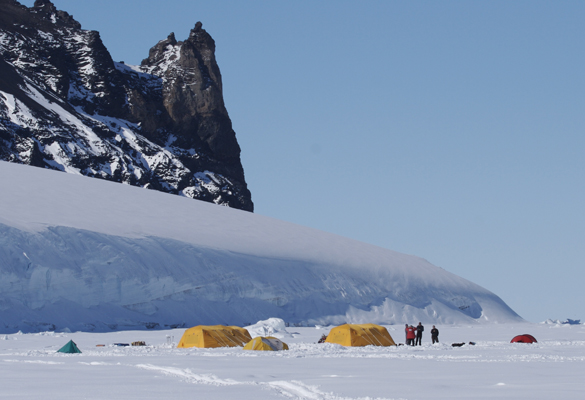 The team camped for three weeks on the frozen sea near Cape Washington. Sleeping on ice a few feet thick had its compensations – sometimes Weddell seals would swim underneath the tents and their beautiful unearthly songs would filter up through the floor. 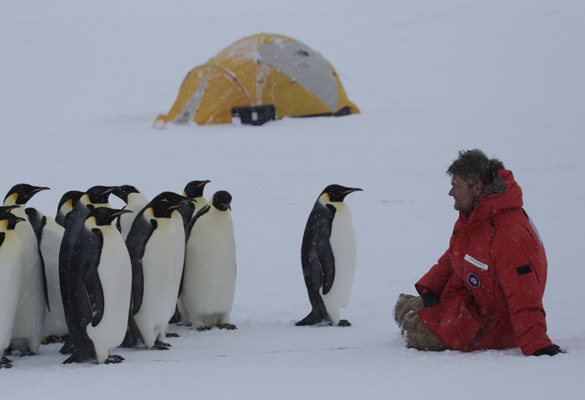 Emperor penguins are lovely neighbours. They would walk over to the tents in any weather and watch whatever was going on with the greatest interest. 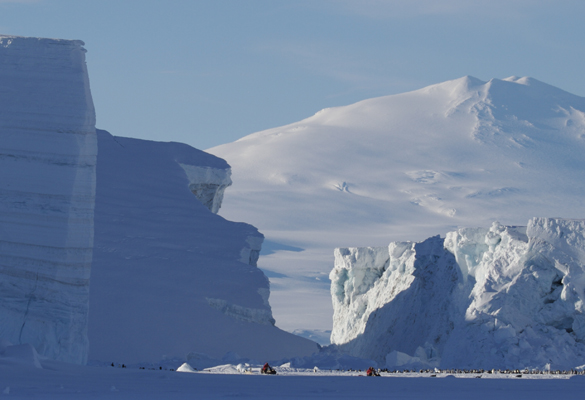 To reach the edge of the sea ice, where the emperors leap out, meant travelling for several kilometres, weaving between these grounded icebergs then on through a maze of pressure-ridges of fractured ice. 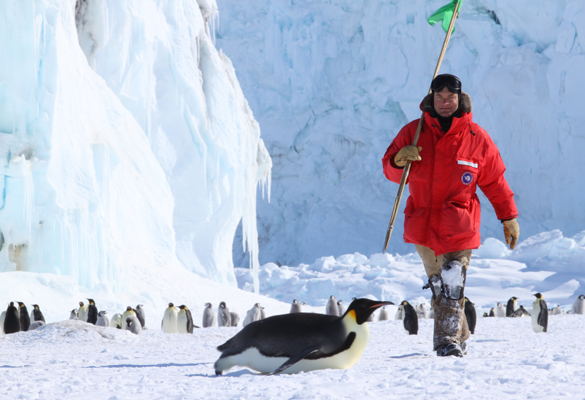 It was often essential to walk ahead of the skidoos to mark crevasses with flags because the sea was not far below the surface and it was several hundred metres deep. In a months’ time the ice would have broken up almost to where the penguins’ chicks live.
Photo courtesy Chadden Hunter 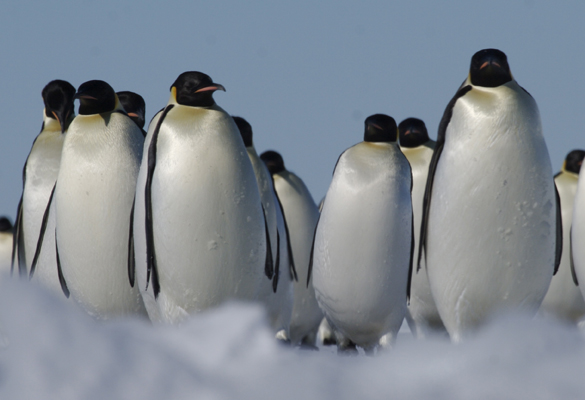 Once they’d made it out of the water the adults still had a long walk ahead of them back to the colony to feed their chicks. 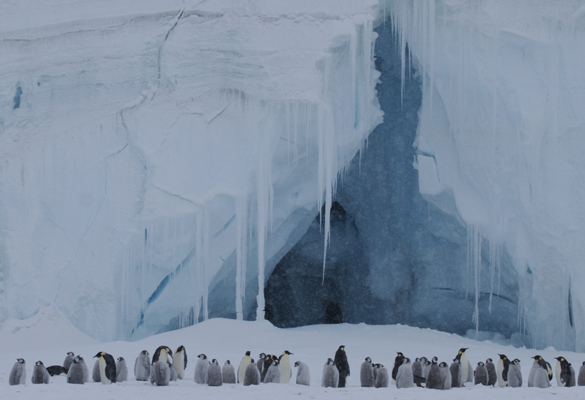 Just as other young birds must learn to fly young penguins have to learn to swim. John travelled to the Fish Islands to the west of the Antarctic peninsula to film Adelie penguins taking the plunge. 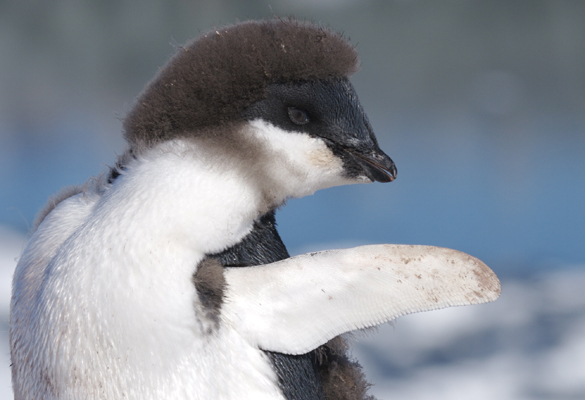 This young Adelie is almost ready, it just has to moult the last of its down. There’s a clip from the series here. 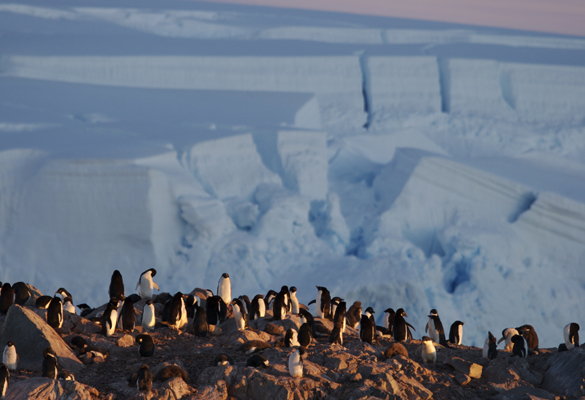 The colony is close to the face of a glacier where ice tumbles into the sea. Of all penguins Adelies are found the furthest south. 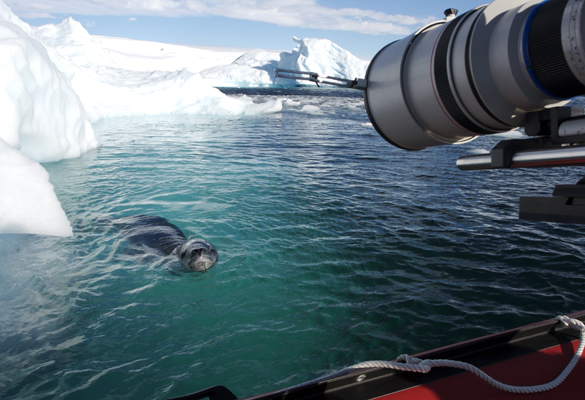 Leopard seals gather where the young penguins will enter the sea. 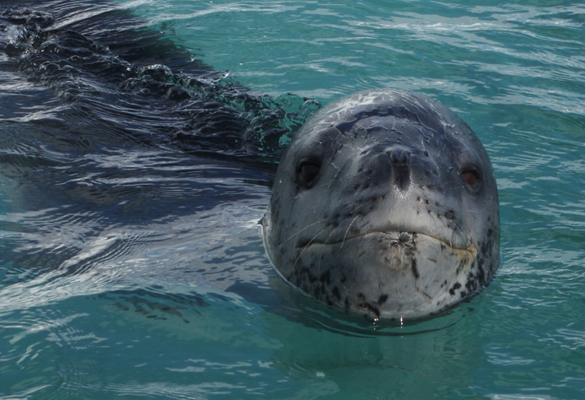 The young penguins’ inexperience makes them very vulnerable to these extraordinary predators. 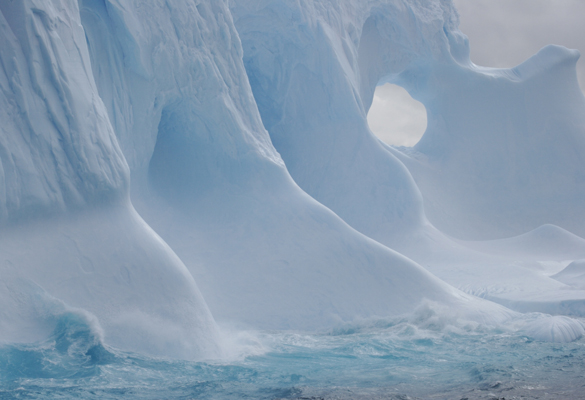 Much of the time the team travelled and lived aboard boats so they took a special interest in icebergs. 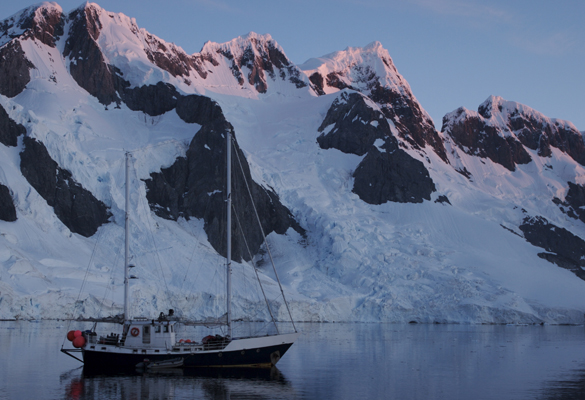 The extraordinary French yachtsman, Jérôme Poncet, took them to the Antarctic peninsula and South Georgia in his boat the Golden Fleece. 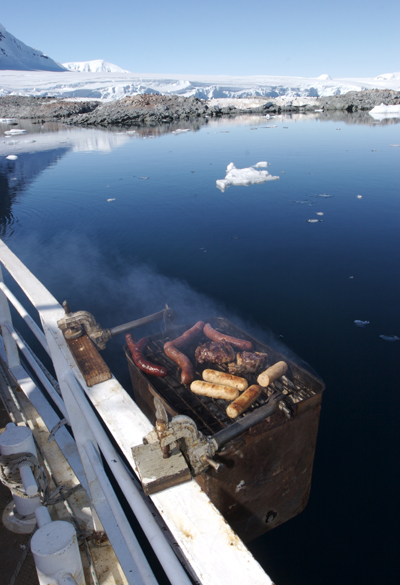 No-one guessed that it would be barbecue weather so close to the Antarctic circle. Loss of sea ice in a warming climate is a serious threat to the Adelie penguins. They eat krill which feed and breed under the ice but around the Antarctic peninsula the annual ice is dwindling very quickly. 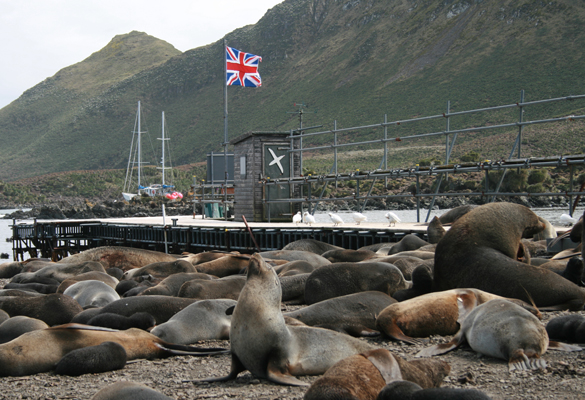 Bird Island is at the western tip of the sub-Antarctic Island of South Georgia. The British Antarctic Survey have had a research base there for more then fifty years. Fur seals have been coming ashore to breed on the island’s main beach for very much longer than that, which makes this a wonderful place to film them, but the males are aggressive and they make no concessions to people so it can be very tricky landing equipment on the pier or if you are in a hurry to reach the toilet by the flag pole. Photo courtesy Miles Barton 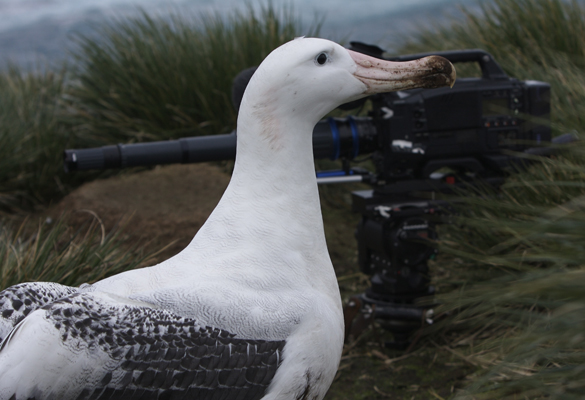 Wandering albatrosses also breed on Bird Island but at best they manage to raise just one chick every two years. When John was there, in November and December, the year-old chicks were taking their first flights while some adult albatrosses were returning to the island to court or to find their long-established mate. Perfect in the air, with the longest wings of any bird, they none-the-less have great trouble landing. This male had nose dived into the tussock grass and then set off to find a female. 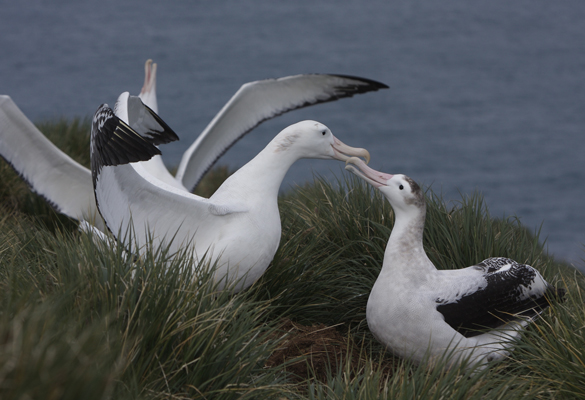 Courtship for wanderers entails showing off the magnificent span of their wings, calling and tapping their bills together. Later the pair will gently preen each others’ heads, showing great trust as their bills have very sharp edges and hooked tips.
Here is a clip about the wanderers of Bird Island. 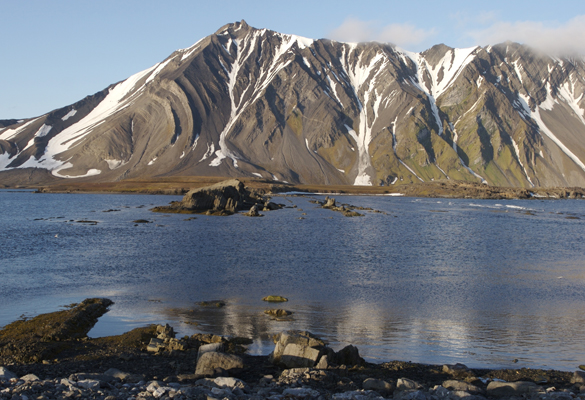 Svalbard, a group of islands in Arctic Norway, was the main location for filming polar bears and the other animals which share this landscape. Here there were large colonies of nesting eider ducks and Arctic terns which the bears raid for eggs and chicks. The terns put up a good defence but the ducks rely on camouflage.
In this clip you can see some of the trials and tribulations of filming eider ducks and their hatching chicks and there’s another clip here about what the bears get up to when they can’t find a duck, a cameraman or his hide to stalk. 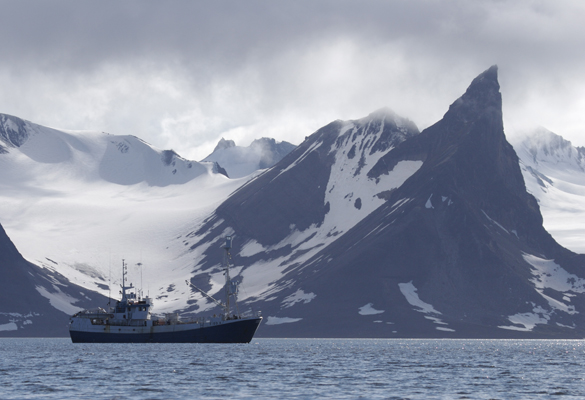 Another boat, the Havsel, was home for seven weeks while the crew travelled right round Spitzbergen, Svalbard’s largest island. 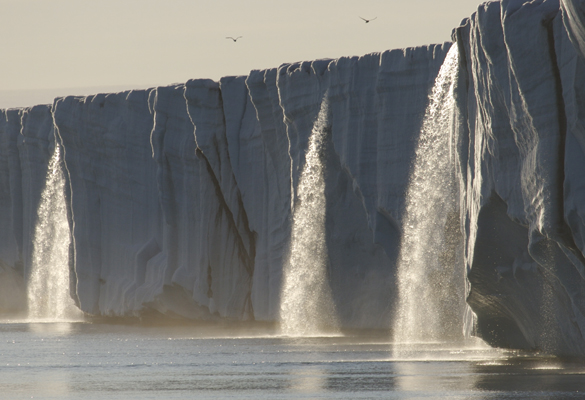 In mid-summer the midnight sun shines through waterfalls of meltwater cascading from an icecap. Even though there was no way up this sheer ice cliff and it’s more than 100 kilometres long a polar bear was swimming along at the foot of it. 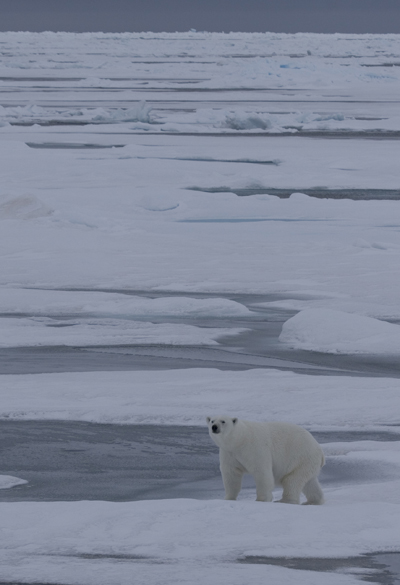 Most of the bears the crew met were, like this one, hunting for seals on the frozen sea.
In the autumn polar bears gather on the shores of Hudson Bay, the furthest south they are found. In contrast to icy Svalbard it seems a very unlikely home for them. 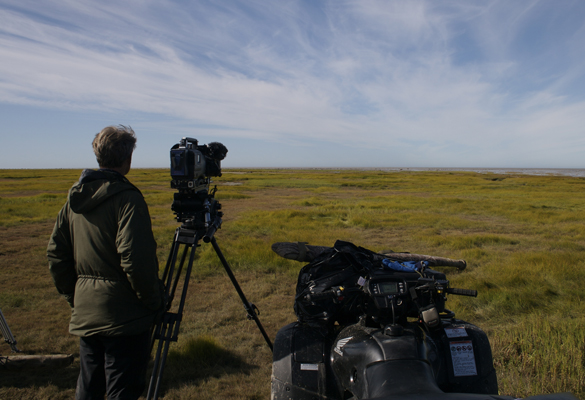 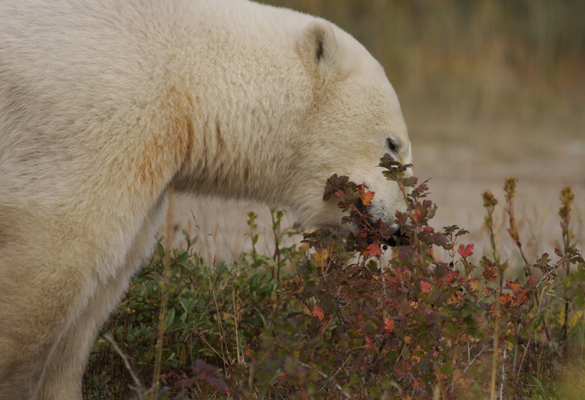 Enormous numbers of snow geese were passing through the area, leaving their Canadian breeding grounds to spend the winter in the southern part of the USA. Meanwhile the bears were eating wild gooseberries and waiting for the sea to freeze.